Also new in WRTC 2010, both operators were allowed to operate at the same time, interleaving contacts, as long as only one transmitted at a time, an operating style borrowed from the Russian Radiosport Team Championship (RRTC). Most participants used a triplexer or diplexer to enable the tri-band Yagi antenna to be shared by both transceivers at the same time without interference. 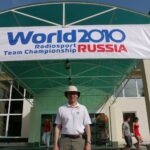 Bob Wilson, N6TV, has shared his extensive photo album from WRTC 2010 and the surrounding events. Click on any link to go to the Google photo album.

END_OF_DOCUMENT_TOKEN_TO_BE_REPLACED

Video about WRTC 2010 held in Moscow.

The final results as certified by the WRTC2010 organizers.

END_OF_DOCUMENT_TOKEN_TO_BE_REPLACED

WRTC-2010 is for the first time Field Day style competition.

All competitors will be located in the same geographical area within 40 x 30 km where height differences are not greater than 40 meters. All competitor locations will be separated at least 500 m from each other. END_OF_DOCUMENT_TOKEN_TO_BE_REPLACED

Overview – This is a summary of the operator selection criteria and evaluation formulas for WRTC-2010. Each competitor may submit up to eight results from the contests in section 1. Each result is calculated according to sections 2 through 4. Application criteria and team distribution are described in sections 5 through 9. END_OF_DOCUMENT_TOKEN_TO_BE_REPLACED